The results of Telegraaf Media Groep ('TMG') for the first half of 2017 were significantly lower than those for the first half of 2016. This development was already visible when the results for the first four months of 2017 were reported on 26 May. Excluding extraordinary and one-off items (particularly restructuring charges and the costs related to the two public offers), in the first half of 2017, TMG reported a negative EBITDA of € 6.1 million, compared to a negative EBITDA of € 1.6 million in the first half of 2016. This is mainly the result of the further decline in advertising revenues, which was also due to portfolio rationalisations. The above-mentioned EBITDA development relates to continuing operations and therefore excludes the results of Keesing Media Group ("Keesing") with a view to the announced upcoming sale and it also excludes the results of the entities contributed to the radio partnership with Talpa. Upon completion, the sale of Keesing will lead to a significantly positive cash position.

TMG has recently entered a new phase. As of 2 July, Mediahuis holds the majority (64.66%) of the shares in the company. On 21 June, Marc Vangeel (CEO) and Koos Boot (CFO) were appointed to the new Executive Board, and the new Supervisory Board was also appointed on that date (see https://www.tmg.nl/en/management-structure). Together with Mediahuis, TMG will resume building a media company with a solid market position, quality editorial boards and strong brands. Under the leadership of the new Executive Board, the focus now lies on TMG's core activities and brands. In the third quarter, the new Executive Board will present its plans to make TMG a strong and leading media company again.

On 18 July, TMG announced that the shares in Keesing will be sold to a partnership to be formed with Ergon Capital Partners, which is subject to approval of the shareholders and the advice of the works councils. TMG will take a 30% stake in this new partnership. The valuation agreed in this regard for 100% of the Keesing company amounts to € 150.0 million (enterprise value, debt and cash free). The net cash flow from the transaction is expected to amount to approximately € 130.0 million (taking into account a reinvestment for the 30% stake and the envisaged level of funding of the partnership, and assuming the bank balance of Keesing as at 30 June). The net cash flow from the transaction will be used to fully settle the credit facilities with the banks. In addition, it will enable the financing of normal operations, as well as the future plans with regard to TMG's core activities and brands. 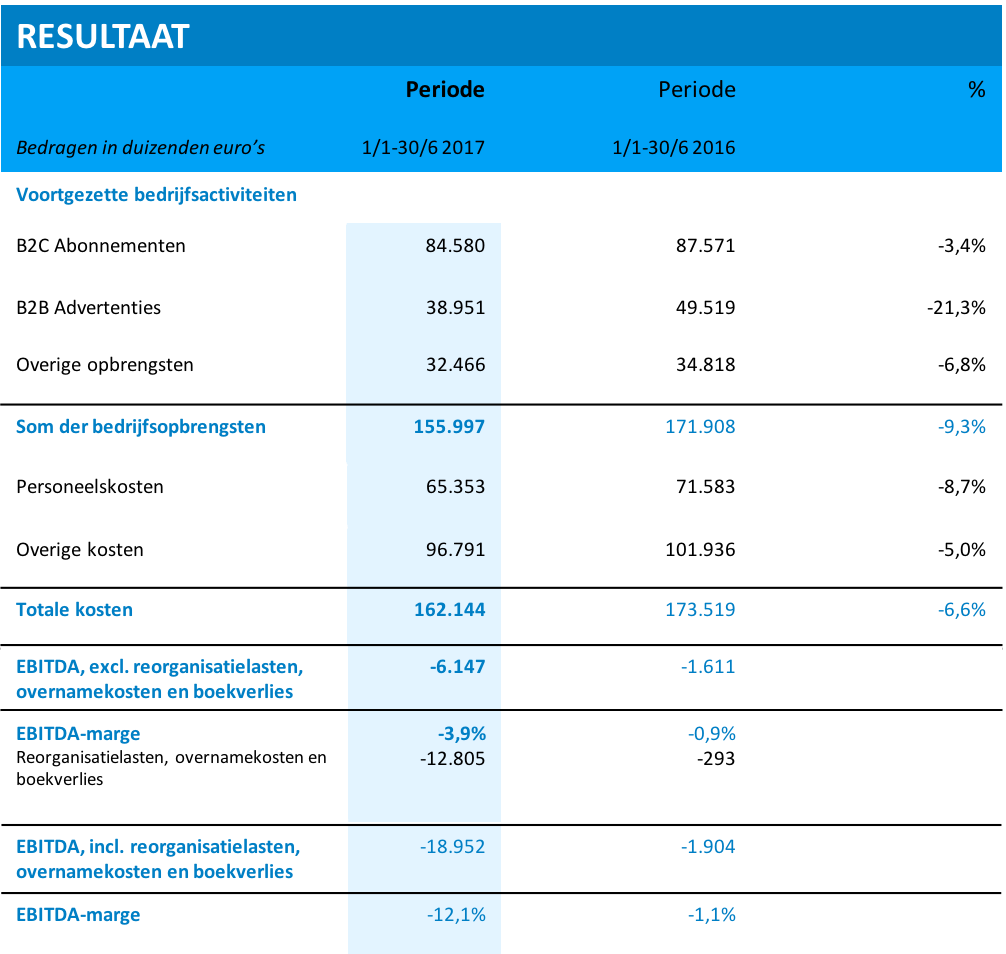 [1] These figures exclude the results of Keesing and the entities entered into the radio partnership with Talpa in 2016.

Costs, excluding restructuring charges, the book loss and oneoff consultancy costs, declined from € 173.5 million to € 162.1 million (–6.6%). This cost decrease was mainly related to a decline in personnel costs following the restructuring implemented in 2016 and 2017 at, among other entities, the printing plants (the first quarter of 2016) and the sales and marketing departments (end of 2016, beginning of 2017). In addition, the transport and distribution costs decreased as a result of portfolio rationalisations and portfolio optimisation, as well as lower circulation. The costs of external advisers (excluding the one-off consultancy costs relating to the public offers and the procedures before the Enterprise Chamber) were also clearly lower. On the other hand, at approximately € 5.0 million, the start-up costs of the new online video platform Telegraaf VNDG clearly added to the costs in the first half of 2017.

The restructuring charges for the first half of 2017 amount to € 3.7 million (2016: € 0.3 million) and mainly relate to the restructuring of the Operations department following the sale of the free local papers and severance payments made to the Executive Board and members of Senior Managerment. The costs relating to the public offers (including the procedures before the Enterprise Chamber) amount to € 8.2 million and concern costs of financial and legal advice. In total, these oneoff consultancy costs in 2016 and the first half of 2017 amount to approximately € 10.0 million.

The result from discontinued operations after taxes amounts to € 6.2 million (2016: € 8.9 million) and in 2017 relates only to the results of Keesing. In 2016, the results of the radio entities contributed to the partnership with Talpa (Sky Radio and Radio Veronica) were also included in this item in the amount of € 3.7 million. Keesing’s revenues rose from € 35.0 million to € 35.4 million (+1.1%), partly as a result of an increase in the number of issues compared to last year. The costs incurred by this business unit decreased by 4% from € 25.1 million to € 24.1 million, mainly due to process optimisations and other cost saving measures. This resulted in an increase in Keesing’s EBITDA by € 1.3 million, from € 10.0 million to € 11.3 million (+13.0%).

TMG’s net result decreased from a profit of € 3.1 million to a loss of € 11.4 million. As described above, the main reasons for this decrease were the revenue decline, high one-off consultancy costs, and start-up expenses related to Telegraaf VNDG.

As of 30 June 2017, TMG’s net cash position is € 20.1 million negative (this concerns the revolving current account facility of € 22.1 million minus € 2.0 million cash position) compared to a positive net cash position of € 14.5 million at year-end 2016. This decline is largely due to the negative EBITDA, restructuring charges paid, and the payment of the revalued Radio Veronica licence for the period 2011-2017 (€ 14.7 million including interest). In addition, there is the effect of recognising Keesing as ‘held for sale’, as a result of which Keesing’s bank balance is part of the assets held for sale (€ 4.7 million).

Adequate agreements were made with the banks about the financing of TMG for the current state of affairs and before and after the sale of Keesing. The net cash flow from the sale of Keesing will be used to fully settle the credit facilities with the banks. In addition, it will enable the financing of normal operations, as well as the future plans with regard to TMG’s core activities and brands.

Outlook
Following the advice of the works councils and after approval of the Extraordinary Meeting of Shareholders on 31 August, 2017, the sale of Keesing is expected to be completed shortly thereafter.

Revenues from advertising and circulation are expected to remain under pressure in the second half of 2017. We will be able to partly offset the effect of this development by costsavings.

During the Investor Relations Day in September 2016, goals were formulated for 2019, which also formed the basis of the goals for the current year. This was reported in TMG's Annual Report for 2016. Given the appointment of the new Board and considering the actual result developments and the pending sale of Keesing, these goals will be redetermined.

The new Executive Board will announce its plans for the future of TMG in the third quarter.

About TMG
TMG is one of the largest media companies in the Netherlands, with strong brands such as De Telegraaf, DFT, Telesport, Metro, Autovisie, Privé and VROUW; online videoplatform Telegraaf VNDG; regional dailies such as Noordhollands Dagblad and De Gooi- en Eemlander; digital brands such as GeenStijl, Dumpert and Gaspedaal; Classic FM and – through a strategic collaboration with Talpa – national radio stations Sky Radio, Radio Veronica, Radio 538 and Radio 10. TMG also has other brands and titles that focus on providing entertainment or e-commerce (e.g., GroupDeal). Through Keesing Media Group, TMG is market leader in Europe in the field of puzzle magazines. TMG’s mission is to provide consumers with high quality, personalised and relevant news, sports and entertainment 24 hours a day, 7 days a week, via all available forms of distribution. For more information about TMG, please go to www.tmg.nl.

TMG submits stock exchange delisting request
Mediahuis, Talpa and TMG reach agreement
TMG shares plans for the future
Extraordinary General Meeting of Shareholders of TMG approves sale of shares in Keesing Media Group
TMG takes note of Talpa’s announcement to not pursue their offer
TMG enters into partnership with Ergon for Keesing Media Group
Home Privacy policy
To the top
Some modules are disabled because cookies are declined. Accept cookies to experience the full functionality of this page.
ACCEPT COOKIES
We use cookies to optimize the website, no personal information is stored. Learn more
DECLINE COOKIES ACCEPT COOKIES