HIGHLIGHTS FOR THE FIRST NINE MONTHS OF 2015

TMG is increasingly focusing on product and concept development through means of its domains and further reinforcement of its main brands, with emphasis on digital growth. De Telegraaf brand is by far the largest with a reach of over 7 million persons.

Revenues in the third quarter 2015 declined by 4,8% in comparison to the same period last year. The decline is in part due to the rationalization of the portfolio, for example the elimination of Sp!ts, as well as the decline in revenues at Radio Veronica.

Geert-Jan van der Snoek, CEO of Telegraaf Media Groep: ‘Where in the first half of 2015 we were primarily focused on adjusting the organisation, with far-reaching change processes as a consequence, the focus has now clearly shifted to new initiatives. In this respect, I refer to the recently announced appointments within the organisation, combined with all initiatives related to new products, propositions and earning models.’ 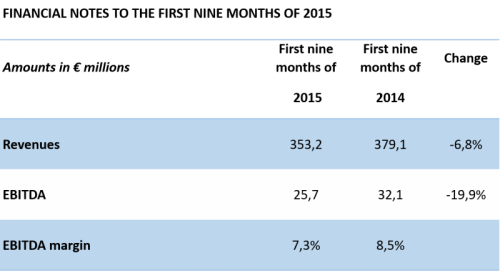 Revenues declined by € 25,9 million (- 6,8%) over the first nine months. Lower costs were insufficient to fully offset the decline in revenues, as a result of which the EBITDA dropped by € 6,4 million (- 19,9%). The decline is primarily caused by a decrease in advertising revenues of € 17,9 million (- 14,7%) for print and radio activities. Circulation revenues showed a slight decrease amounting to € 5,0 million (- 2,4%). The reduced circulation revenues generated by national as well as regional media are partially offset by the higher revenues of the Keesing Media Group driven by the publication of more titles, including colouring books for adults. The reach of the brand De Telegraaf (print and digital) has increased to half the Dutch population.

The overall market share of Sky Radio Group (10+ years) declined, however Sky Radio and Radio Veronica increased their market share in the women aged 20-34 and men aged 35-49 target groups, respectively. Revenues from radio activities nevertheless declined by € 5,0 million (- 19,5%). This is exclusive of a one-time benefit of € 1,9 million realised last year as a result of the sale of the international activities and intellectual property of MyRadio.

For TMG as a whole, costs (exclusive of write-offs) declined by € 19,6 million, primarily due to a decrease in circulation-related raw materials, printing and distribution costs (€ - 10,2 million). Personnel costs declined by € 3,3 million due to the ‘FTE’ reductions arising from the ongoing reorganisations at TMG Landelijke Media and Holland Media Combinatie. 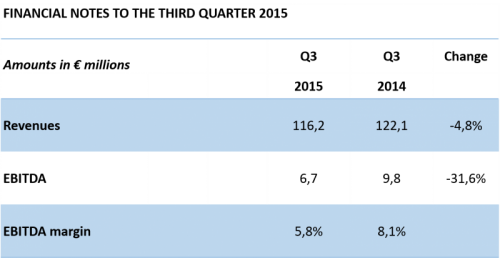 Revenues in the third quarter declined by € 5,9 million (- 4,8%) in comparison to the same period last year. This decline was relatively smaller than in the first two quarters of 2015, when it was 7,1%. The lower revenues are primarily caused by a decline in organisation-wide advertising revenues, amounting to € 4,5 million (- 13,1%). Circulation revenues declined marginally by € 1,1 million (- 1,6%).

The EBITDA in the third quarter amounted to € 6,7 million in comparison to € 9,8 million in the same period last year. The lower revenues were for a good part offset by the various cost-saving initiatives and lower revenue-related costs.

TMG’s business operations are subject to seasonal fluctuations under normal economic circumstances. Advertising revenues are higher in the second and fourth quarters of the year than in the remainder of the year. This is related to the public holidays during these periods. The single copy sales of De Telegraaf and the Keesing Media Group’s publications are higher in the third quarter due to the holidays. The figures are presented on the basis of total operations. The comparative 2014 figures have been adjusted accordingly.

This press release is a translation of the original text in Dutch. In the event of a discrepancy between the two versions, the one in the Dutch language prevails.