During the General Meeting of Shareholders (EGM) to be held on 1 June 2017, Telegraaf Media Groep N.V. (“TMG”) will provide a further clarification regarding the public offer made by Mediahuis N.V. and VP Exploitatie N.V. (together “the Consortium”). TMG is committed to informing all stakeholders about the latest state of affairs at that moment. 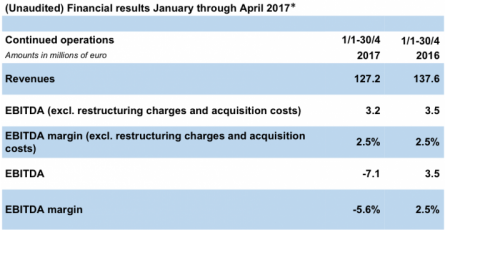 *These results are unaudited and the 2016 results are excluding the results of the entities contributed to the radio partnership with Talpa (Sky Radio and Radio Veronica).

Notes to the financial results January – April 2017
The decline in revenues is largely the result of a drop in income from print advertising, caused by the continuing shrinkage in the advertising market. In addition, starting in early 2017, the implementation of the restructuring in the sales and marketing organisation as a result of which less sales could be realised, also has a negative impact. Excluding the effect of portfolio rationalisation (termination of Dichtbij, partial termination of Rotterdam/Utrecht activities, termination of production for third parties and acquisition Fashion Week) revenues are down by 6.8%.

Costs, excluding restructuring charges and costs related to the public offer, were down 7.5% at EUR 124.0 million. The decline in costs was primarily the result of lower costs for outsourced print activities, that was partly insourced, and of lower personal expenses on the back of the restructuring implemented in areas such as the printing plants and the editorial staff in 2016.

EBITDA including extraordinary items declined to EUR -7.1 million, down from EUR 3.5 million a year earlier. The extraordinary items were related to restructuring charges for the proposed sale of the door-to-door magazines to BDUmedia, and severance payments for the Executive Board and senior managers, plus consultancy costs incurred in the context of the public offer. EBITDA excluding the restructuring charges and excluding the costs related to the public offer declined in the first four months of 2017, to EUR 3.2 million, from EUR 3.5 million in the first four months of 2016.

At the end of April 2017, TMG has net debt of EUR 13.3 million versus a positive net cash position of EUR 14.5 million as of December 31, 2016. This decline is largely due to paid restructuring charges and the payment of the revalued radio Veronica licence for the period 2011-2017 (EUR 14.7 including interest). There are constructive talks ongoing regarding the continuation of the current bank credit facility and together with Mediahuis adequate arrangements have been made regarding financing TMG after the bid is declared unconditional.

As from the start of 2017, TMG continued to implement the restructuring of the company’s sales and marketing organisation, in line with the efficiency measures announced in July 2016. The new sales and marketing organisation now operates from a centralised location, targets all TMG clients and partners and works for all national and regional titles.

On 23 March, TMG announced the proposed sale of its door-to-door magazines to BDUmedia, also in line with the efficiency measures announced in July 2016. TMG expects to complete this transaction in the foreseeable future.

In the first four months of 2017, TMG also worked hard to further strengthen its brands, primarily through optimisation of the online video offering. The most striking development was the launch on 1 May of the online video platform Telegraaf VNDG, though which TMG and De Telegraaf, in line with the 24/7 strategy, are responding to the exponential growth of online [video] watching and the shift of advertising budgets to online media. Telegraaf VNDG is an online video platform, with high quality news broadcasts and short programmes. On Telegraaf VNDG, viewers will find familiar Telegraaf faces such as John van den Heuvel, Maarten Steendam and Jaap de Groot, either in their own programmes or as experts in other programmes. Telegraaf VNDG is a unique supplement to the trusted printed newspaper De Telegraaf and to the trusted printed newspaper De Telegraaf and to Telegraaf.nl. The platform enables TMG to provide even better services for consumers, at any time, in any location, via computer, tablet and smartphone. The Telegraaf VNDG programmes are available via Telegraafvandaag.nl and via the iOS/Android VNDG-app.

Recommendation on the public offer from Mediahuis N.V. and VP Exploitatie N.V.
On 19 April, the Consortium launched their public offer which is recommended by TMG. The Supervisory Board[2], also temporarily charched with the executive function, has recommended the offer because the Consortium’s strategy is a close fit with TMG’s existing strategy and that the combination with Mediahuis provides the company the best future. The combined strategy ensures the position of the core news division and focuses on digital, online, radio and video developments. The price is fair, there is a high level of deal certainty and TMG has made arrangements with the Consortium through which the interests of all stakeholders are safeguarded to the maximum extent. Together, we aim to create a leading multimedia company. The position statement with respect to the public offer is available on the TMG website.

The central works council supports the decision of the Supervisory Board to recommend the offer from Mediahuis and VP Exploitatie and on 1 May the Consortium received permission from the Dutch consumer and market regulatory body (Autoriteit Consument en Markt – ACM) for the acquisition of TMG. The tender period for the offer will end on 15 June at 17.40 hours.

On 15 June, the Enterprise Chamber will hold a hearing for the remaining request from Talpa to institute an investigation in response to the signing of the merger protocol by TMG. On 21 March, the Enterprise Chamber rejected all the temporarily measures Talpa had requested. TMG is also confident about the outcome of this pending proceeding.

As described above, TMG booked costs of EUR 5.3 million in connection with these proceedings in the first four months of the year. The total costs in 2017 of the public offer, including the proceedings before the Enterprise Chamber, are expected to be of EUR 10 million and will be largely related to the costs of financial and legal advisors.

About TMG
TMG is one of the largest media companies in the Netherlands, with strong brands such as De Telegraaf, Telegraaf VNDG, DFT, Telesport, Metro, Autovisie, Privé and VROUW; regional dailies such as Noordhollands Dagblad and de Gooi- en Eemlander; digital brands such as GeenStijl, Dumpert and Gaspedaal; Classic FM and – through a strategic collaboration with Talpa – national radio stations Sky Radio, Radio Veronica, Radio 538 and Radio 10. TMG also has dozens of other brands and titles that focus on providing local news, entertainment or e-commerce (e.g., GroupDeal). Through Keesing Media Group, TMG is market leader in Europe in the field of puzzle magazines and digital puzzles. TMG’s mission is to provide consumers with high-quality, personalised and relevant news, sports and entertainment 24 hours a day, 7 days a week, via all available forms of distribution. For more information about TMG, please go to www.tmg.nl.

[1] The executive function has been carried out by Mr. Nooitgedagt, Mrs. Brummelhuis and Mrs. Van den Belt.

[2] Mr. van Puijenbroek has, as member of the Supervisory Board, not participated in discussions and decision-making regarding the proposal from Mediahuis and VP Exploitatie.

This release is a translation of the original text in Dutch. In the event of a discrepancy between the two versions, the Dutch version prevails.